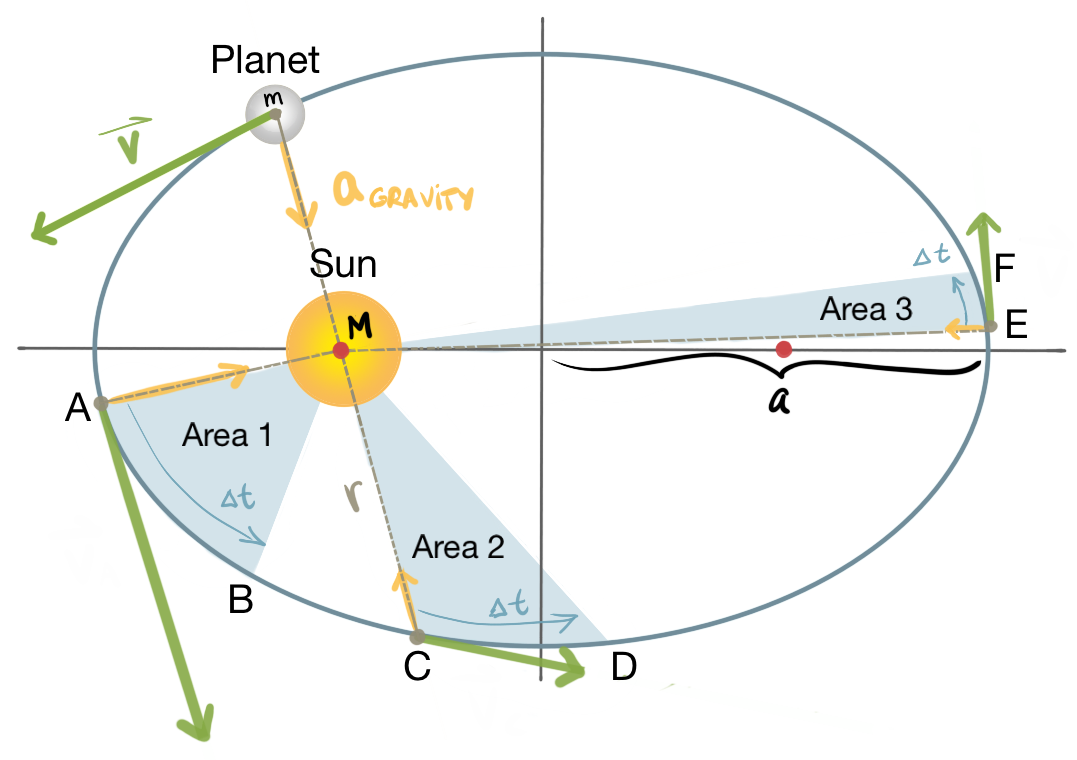 Caption. A planet with mass m and velocity v undergoes a Keplerian orbit about a star (sun) with mass M. This particular orbit is elliptical and has a semi-major axis of a. The planet will have a faster orbital speed when it is closer to the star (smaller radius r), such as at point A compared to point E. In a Keplerian orbit, the orbiting body stably orbits the central body since its perpendicular motion to the star is balanced by the central body’s inward gravitational pull a\(_{gravity}\). Credit: G. O. Hollyday.

An orbit balanced only by gravity is known as a Keplerian orbit. The following equation describes the motion of a body in orbit around a central body where gravity is the only force involved. This equation will hold true for any stably orbiting mass subject only to first-order gravitational forces. The angular velocity \(\omega\) for a Keplerian orbit is dependent on the mass of the central body M (the body being orbited e.g., the corotating region of a synestia) and how much distance, r, there is between the center of the orbiting body and the center of the orbited body.

The semi-major axis of an orbit is half the distance between the farthest parts of the orbit (a in the image above). The inclination of an orbit is how rotated the orbital plane is in comparison to the midplane (z = 0).

Below is an interactive plot of what a Keplerian orbit should look like for a moonlet (dot) orbiting an Earth-mass body (star). Feel free to play with the semi-major axis (half the distance between the farthest parts of the orbit, a in the image above), inclination (how rotated the orbital plane with comparison to the midplane), and eccentricity of the moonlet’s orbit and see how it affects the moonlet’s trajectory. Inclination is in radians, where 0\(^\circ\) is 0 radians and 180\(^\circ\) is \(\pi\) radians. To convert from radians to degrees, multiply the number in radians by 180/\(\pi\).

Access interactive features by ‘Launch Binder’ or ‘Launch CoLab’ from the rocket logo at the top of the page. When the interactive environment is ready, place your cursor in the code cell and press shift-return to execute the code. If using CoLab (loads faster), you need to edit the code cell as directed to install rebound.

Caption. In the interactive above, a moonlet (dot) orbits an Earth-mass body (star) on a Keplerian orbit. Keplerian orbits are stable orbits balanced by gravity only. They can be circular (eccentricity = 0) or ellipsoidal (0 \(<\) eccentricity \(<\) 1) in nature.