There are two ways to think about angular velocity.

Body 1 is orbiting body 2, just like Earth travels on a curved path about the sun’s rotational axis. 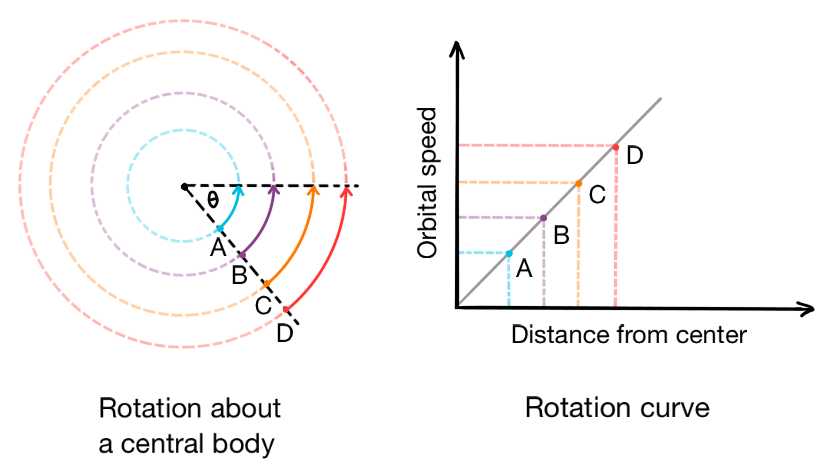 Caption. On the left, imagine having a bird’s eye view of the plane that body 1 is orbiting body 2 (black dot at center) in. If body 1 were to conserve its angular velocity, body 1’s orbital speed would quicken as its orbital distance from the center increased (from A to D). Credit: G. O. Hollyday. 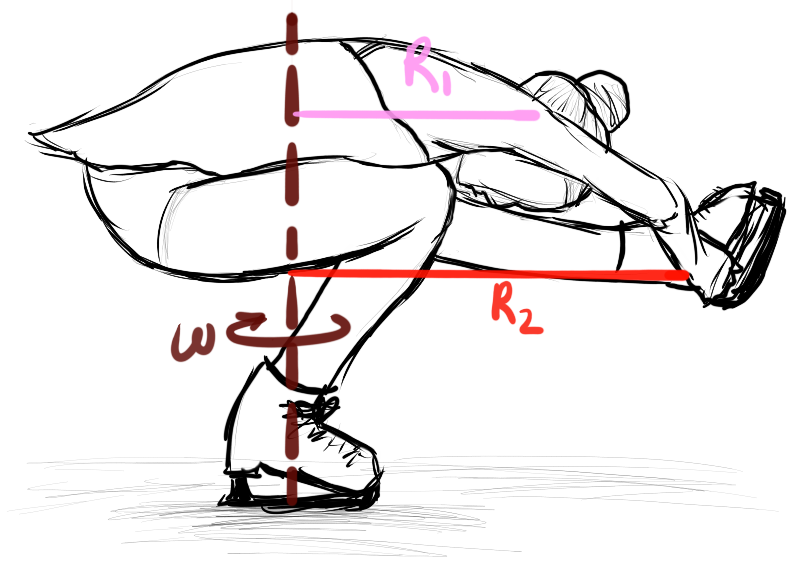 Start by considering a spinning figure skater with her leg extended (see image above). The foot (red R\(_2\)) has a larger radius and has to travel a longer arc about the body to line up with the shoulder (pink R\(_1\)), which is closer to the rotational axis (maroon \(\omega\)) and does not have to travel as large of a distance about the body. In the same amount of time (over the same angle change), these body parts must travel different speeds to maintain the body’s rate of rotation (angular velocity). A component must move faster if it is located at larger radii from the rotational axis, so the foot would have a faster linear velocity than the shoulder would.

The figure skater in the image above spins with the same angular velocity even though her outstretched limbs may travel at faster linear velocities than her torso.

The relationship between angular velocity \(\omega\) and linear velocity v is

A solid, rotating body can have the same angular velocity, yet portions of the body at different radii will have different linear velocities. If we are only looking at the angular velocity in z, so that our rotational axis is z, then the perpendicular radii would make up different sized orbits in the xy plane (at various z). You can also think of the distances from the rotational axis as nested cylinders. The outer orbits/cylinders would be at larger radii, so to maintain the body’s rotational velocity, that portion of the body would need a linear velocity (tangential to the orbit/cylinder made in the xy plane, or rather, perpendicular to the radius) that is faster than the portions of the body at smaller orbits/cylinders (radii).