Before reading this Jupyter Notebook, it may be helpful to review angular velocity.

…As Does Everything Else in the Universe¶

unless acted upon an force external to the system. Torques (\(\tau\)) impart rotational acceleration that changes the angular momentum of a body,

The equation for a torque \(\tau\) is given by

where F is a force that is perpendicular to the rotational axis, a radial distance r away. Like linear forces, there may be many torques that act summatively on a system. If the net torque on a system is zero, then angular momentum does not change with time.

We deal with torques on a daily basis. Every time we open a door, we are exerting a torque on the door handle to swing the door open. Handles on doors are always farthest from the hinges of a door because it requires less effort (force F) on your part if the distance (r) to the axis of rotation (the vertical line where the hinges of the door meet a wall) is larger (see image below). Try this for yourself – have you noticed how much more difficult it is to open a door when you are pushing on it close to the door’s hinges? 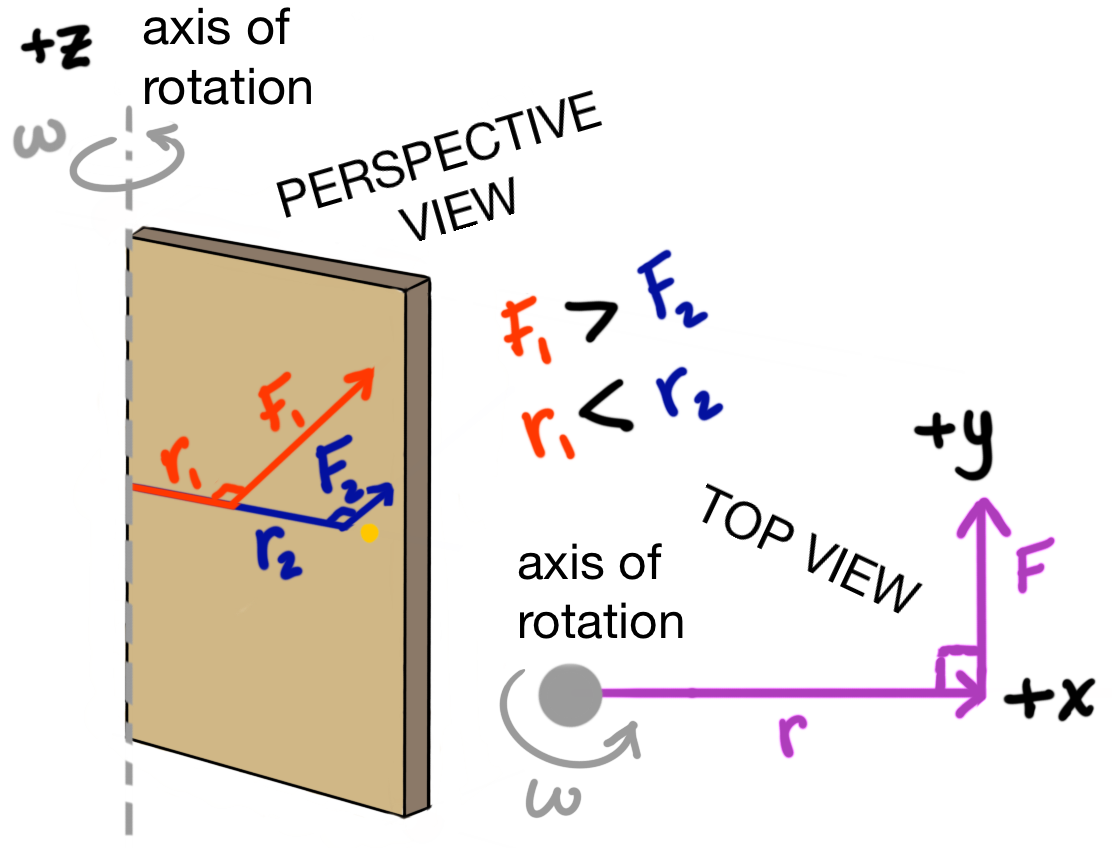 Caption. Torques exerted by pushing open a door. By pushing on a door at a larger radius (r\(_2\)), relative to the axis of rotation (grey dashed line on side of door with hinges on left), less perpendicular force (F\(_2\)) is needed to rotate the door at a given angular velocity (\(\omega\)). Credit: G. O. Hollyday.

Similar to angular velocity, angular momentum can describe the rotational inertia of either: 1) smaller components within a solid body undergoing rotation or 2) an orbiting body. 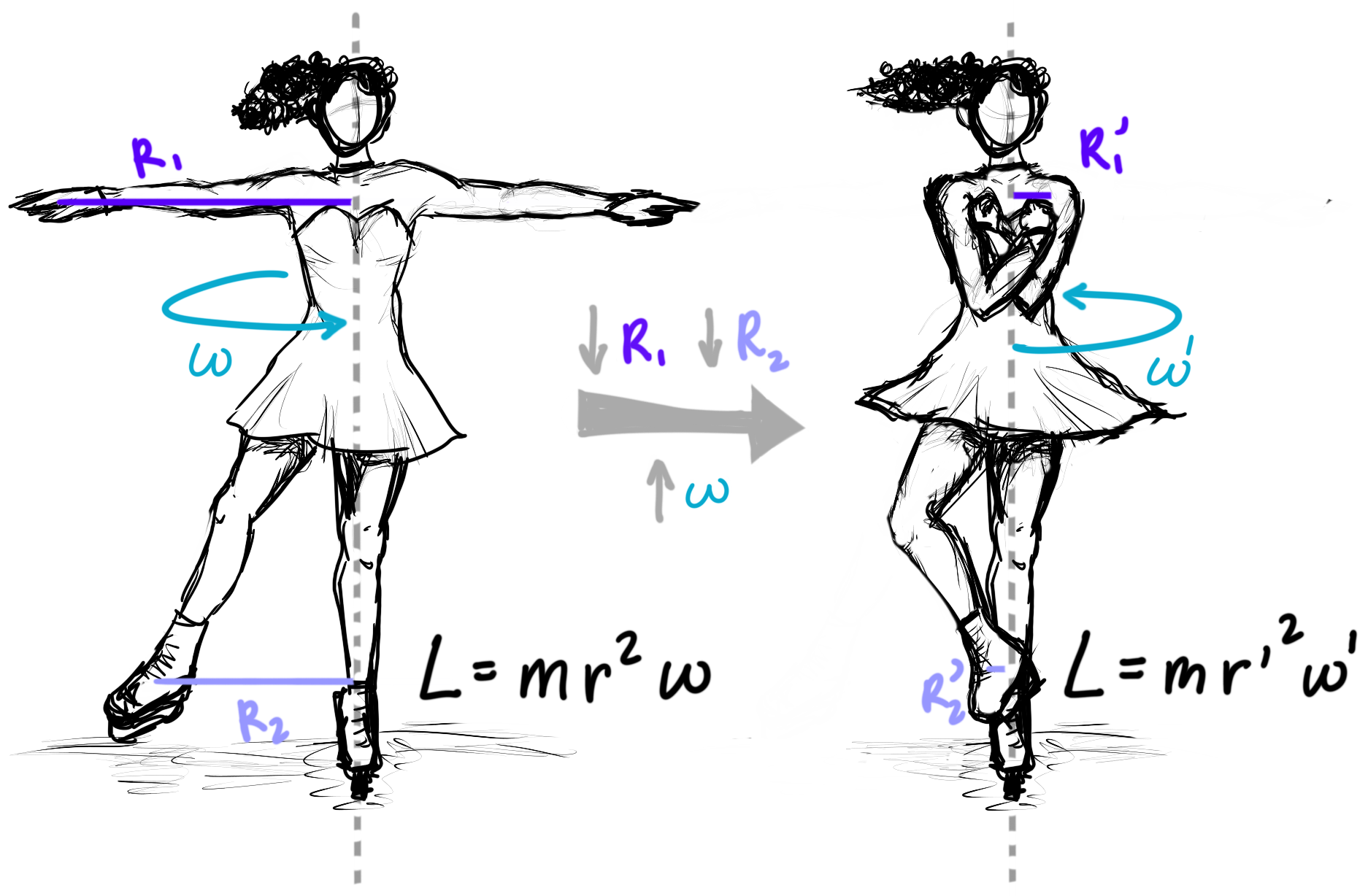 Caption. To increase their spin from \(\omega\) to \(\omega\)’, a figure skater with mass m must draw their arms and legs in towards the center of their body (the rotation axis; dashed grey vertical line). Credit: G. O. Hollyday.

Consider a figure skater that is spinning with her limbs extended (see image above). According to conservation of angular momentum, she must bring her limbs in close to her body in order to spin faster. Her overall mass will not change, so if she wants to increase her rotational velocity, she must reduce the distance between the outermost parts of her body and her rotational axis. A figure skater who is more massive would have greater overall angular momentum.

Elliptical orbits are possible due to conservation of angular momentum. Consider a planet that is stably orbiting about a central mass (a star). In the farthest part of its eccentric orbit, the planet will transit at its slowest orbital velocity (minimum \(\omega\) of orbit) because it is far from its star (large r) and the planet’s mass does not change. At the planet’s closest approach, the planet will be traveling at its fastest orbital velocity (maximum \(\omega\) of orbit) since it is very close to its star (small r) and, again, the planet’s mass does not change.

Access interactive features by ‘Launch CoLab’ or ‘Launch Binder’ from the rocket logo at the top of the page. When the interactive environment is ready, place your cursor in the code cell and press shift-return to execute the code. If using CoLab (loads faster), you need to edit the code cell as directed to install rebound.

Caption. Comparison of orbit of a planet (aqua) with an angular momentum of Earth when its angular momentum is preserved and its mass is increased or decreased. The orbit of an Earth-mass planet is shown in red. One astronomical unit (au) is equal to the average orbital distance of Earth to the sun (Earth’s semi-major axis = 1 au).

As you can see, changing the mass of the body significantly affects the orbit’s radius, assuming the planetary body maintains a Keplerian orbit.

The Role of Angular Momentum in a Synestia¶

Caption. During an impact (reality is shown on left), it is easier to compute the physics for and think about the impact in terms of a reference frame (right) that is centered on the slower moving body (known as the target; m\(_1\) in this case). The relatively faster moving body is known as the impactor (m\(_2\) in this case). In a reference frame, the target is stationary and the motion of the impactor is calculated relative to the target. Credit: G. O. Hollyday. 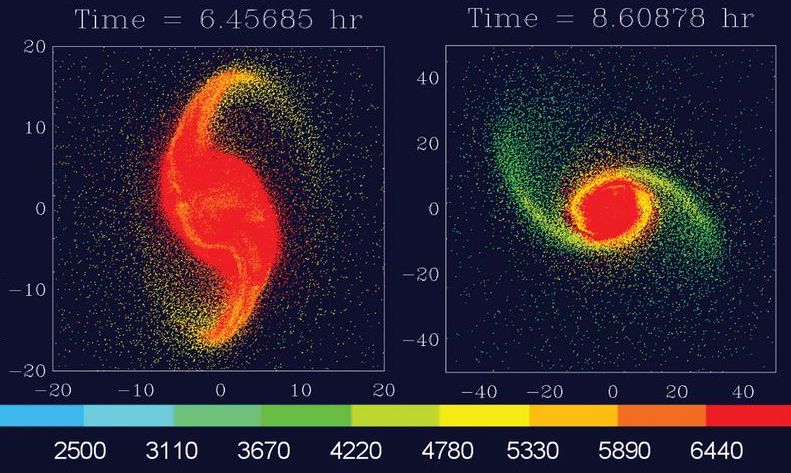 Caption. In a giant impact, mutual gravitational attraction between the impacting bodies generates rotational motion in the post-impact system, which can then create angular momentum arms. These angular momentum arms concentrate mass at various radii away from the center of the system, and can be seen as spiral arms in both panels. Panels are bird’s eye views of two post-impact stages (time in hours at top; time of impact is 0 hr) following a high-angular-momentum giant impact simulation between two half-Earth masses. Colors are temperature in Kelvin corresponding to the color bar at the bottom where red indicates temperatures greater than 6,440 K. Axes are distances from the center of mass in 1,000 km. Credit: adapted Figure 1 from (Canup, 2012). Modified with permission from Robin M. Canup and reprinted with permission from AAAS.

A droplet condenses at the photosphere of a synestia as it radiates heat into space. The droplet falls (towards the midplane of a synestia) into the interior, surrounded by gas. As gas drags on the droplet, the droplet spirals in towards the center of a synestia, losing velocity and distance from the rotational axis. The droplet transfers its angular momentum to the gas around it. The velocity of the gas increases in response (see image below). Since the droplet will always move faster than the gas, the increase in velocity will mean a smaller velocity differential between the gas and a droplet at the gas particle’s location. It’s too late for this to affect the first droplet that spiralled in, but if there were another droplet traveling behind the first droplet, the gas drag on the second droplet would be weaker. 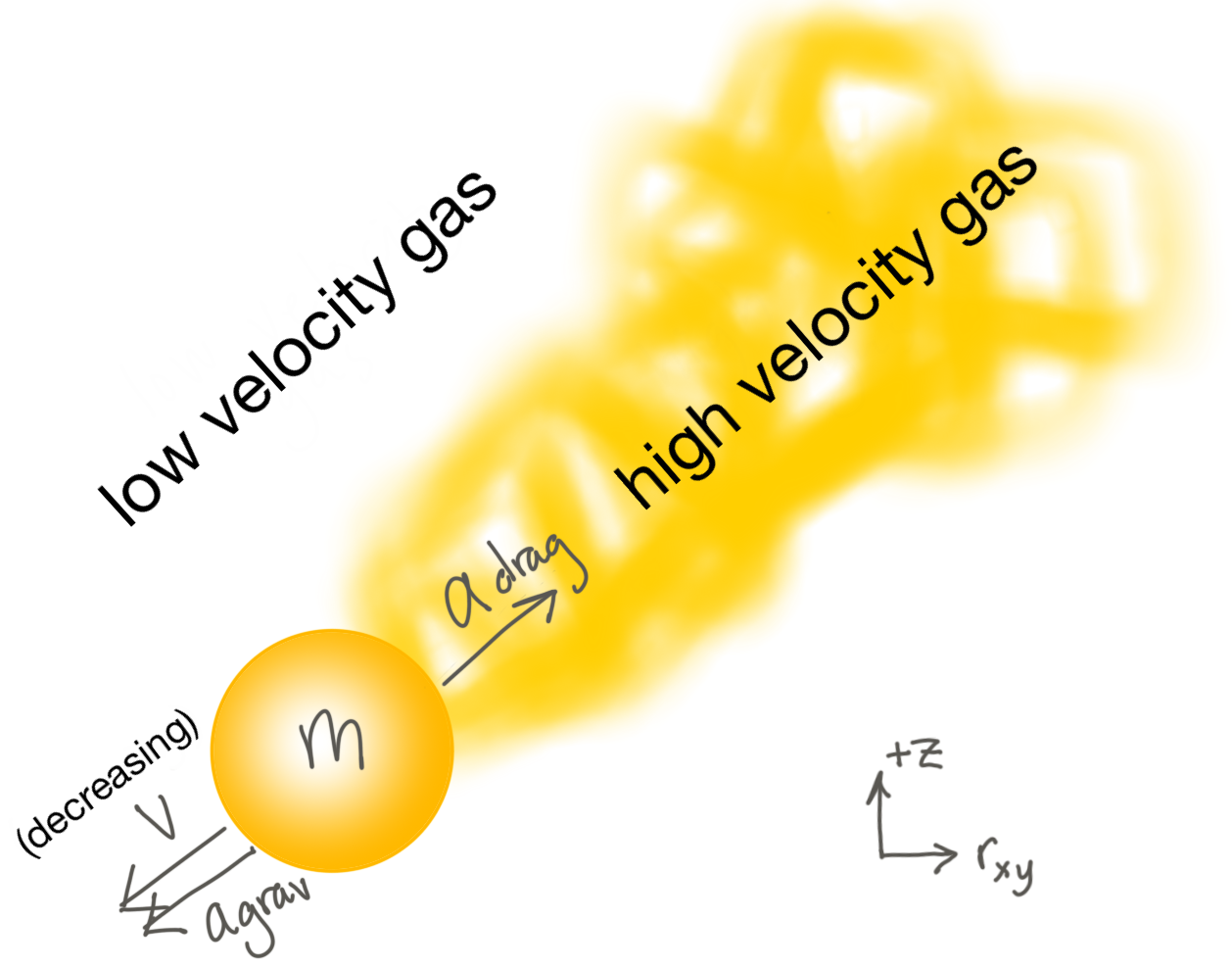 Caption. The accelerations imparted on a recently-condensed droplet of mass m at the photosphere of a synestia. Gravity accelerates the droplet via a\(_{grav}\) towards the center of a synestia. Gas drag imparts an acceleration a\(_{drag}\) in the opposite direction of motion of the droplet. As gas drag successfully decreases the velocity v of the droplet, the gas responsible for the deceleration (now in the wake of the droplet) will increase in velocity according to conservation of angular momentum. Credit: G. O. Hollyday.

If a moonlet in the midplane spirals inward, and is not accreted by another moonlet or slowed by any means, the moonlet will reach the corotating planet-like region of a synestia and become part of the central planet-like mass. This is known as “falling onto the planet”. As the planet-like spheroid’s mass increases, its spin must increase to conserve angular momentum (see image below). As a synestia evolves through time, the corotating region will likely rotate at an increasingly faster rate as it accretes more mass from moonlets that could not escape their decaying orbits. 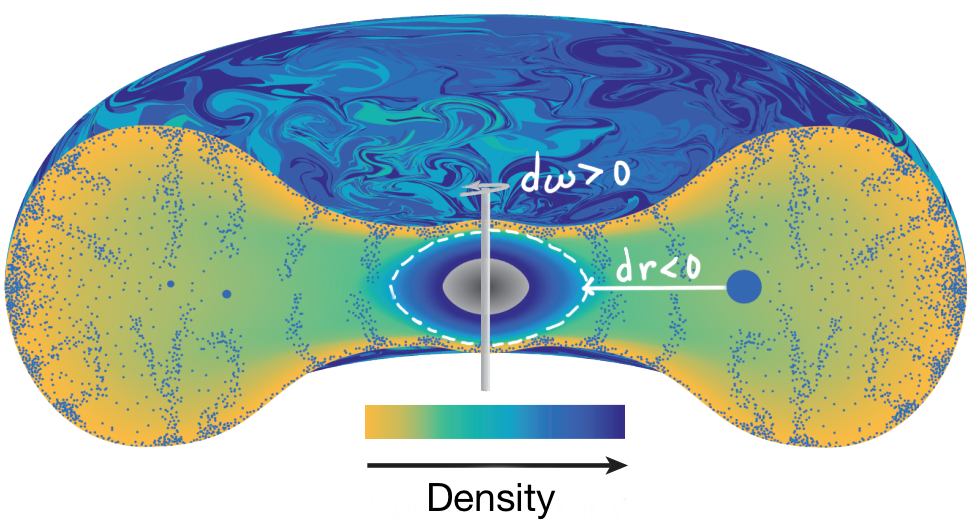 Decreasing the Angular Momentum of the Earth-Moon System¶

When a high-angular-momentum synestia cools enough that it transitions into a system consisting of a molten, rapidly-rotating (oblate) planet and a closely-orbiting, liquid moon, there are still a few steps to reach the Earth-Moon system we know of today (see image above).

Caption. When the sun, Earth, and Moon are aligned at right angles, an evection resonance occurs and angular momentum transfers from the Earth-Moon system to the sun. Credit: Reposted with permission from Raluca Rufu (Rufu & Canup, 2019).

This transfer of angular momentum from the Earth-Moon system to the sun is important, because otherwise the hypothesis that a synestia with a bulk Earth composition formed the Earth-Moon system would not be plausible. Additionally, as a result of starting with higher angular momentum, there is a wide range of impact scenarios that can form a lunar mass out of a synestia, compared to the canonical model for lunar formation.