Recent research on synestias arose from research on the origin of the Moon. Since the 1970’s, planetary scientists have confirmed and then since agreed that a giant impact to Earth formed the Moon. The birth of the Earth-Moon system via giant impact has not been the point of debate. However, the details of the most-oft proposed giant impact, a Mars-size body that grazes an early Earth, have been scrutinized.

The Moon Formed From a Giant Impact…¶ 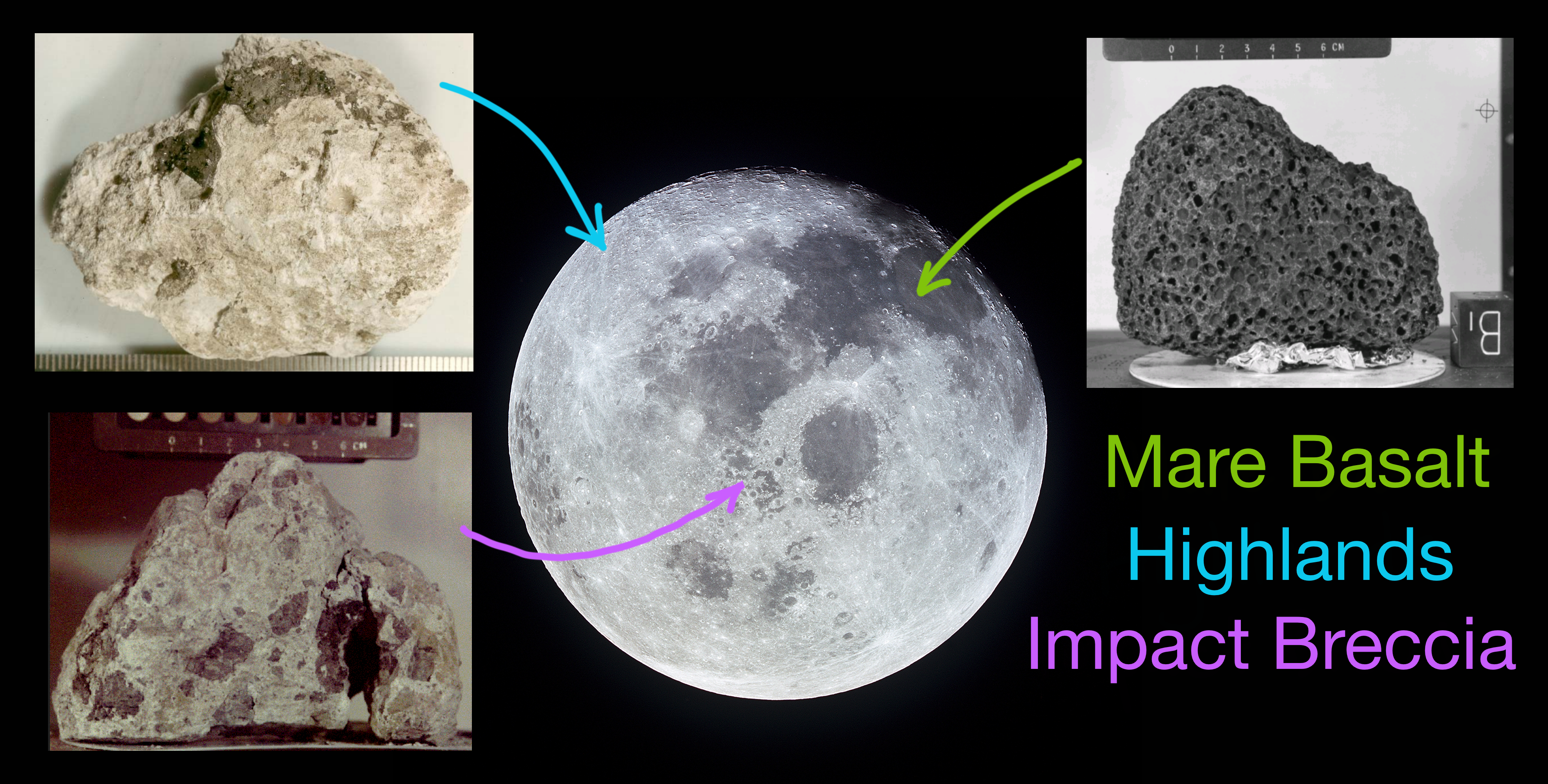 Apollo missions during the 1970’s increased scientists’ knowledge and understanding of the Moon. To their surprise, the Moon’s crust is geochemically similar to Earth’s mantle. The Moon is covered in basalts, much like what we see erupting from volcanoes on Earth. The Moon’s basalts are known as mare basalts (green in image above) because from afar, the dark swaths on the Moon were thought to be dried-up seas; we know now that they were liquefied pools of rock formed via lunar volcanism.

The craters scattered over the highlands are a result of meteoritic impacts to the Moon’s surface once it formed a solid crust. The surface solidified a long time ago, which is why there are so many craters present on the Moon’s surface. When meteorites impact the lunar surface, the collision pressurizes and melts the local area to a certain extent. This is why glasses (rock droplets that quickly cooled during their post-impact ejection from the surface) and breccias (conglomerate of different rocks mashed together)(magenta in the image above) are vastly present near craters on the lunar surface. The nature of rocks found on the Moon’s surface indicate a host of magmatic (melt) processes occurred on the Moon.

The most probable cause of the flotation crust that formed the lunar highlands is a giant impact between some extraterrestrial body and the early Earth. Giant impacts were fairly common, about three giant impacts every one hundred million years according to terrestrial formation models (Quintana et al., 2016), when the Earth-Moon system formed (towards the end of planet formation in the early solar system about 4.5 billion years ago). Giant impacts can form planet-moon systems, and since giant impacts cause significant portions of the impacting planetary bodies to melt and vaporize, the resulting planet-moon system would have molten surfaces (magma oceans). However, there are many other indications that the Moon formed via a giant impact:

There is one feature of the Moon that the giant impact cannot explain: the Moon orbits at an inclination (5\(^{\circ}\)) off the Earth’s orbital plane. Giant impacts will form moons in the midplane (orbital plane) of the planet (0\(^{\circ}\) inclination). A separate mechanism is needed to increase the Moon’s orbital inclination, but none of the proposed mechanisms (Touma & Wisdom, 1994; Ward & Canup, 2000; Pahlevan & Morbidelli, 2000) have been favored by the lunar research community; this is a matter of ongoing research. The giant impact isn’t needed to explain this aspect of the Moon, and accounts for many of the other physical and chemical observations of the Moon.

…Just Not in the Giant Impact You’re Used To.¶

Every planetary body in the solar system has a distinct chemical and isotopic signature, so much so that oxygen isotopes alone act as a fingerprint for each planet and meteorite group (the rocky materials of the solar system). However, Earth and the Moon have nearly identical isotopic fingerprints. Since it is unlikely for the impacting bodies to have the same chemical and isotopic makeup, the giant impact has to mix the material really well to homogenize it. The canonical model giant impact has trouble mixing the material from the impacting bodies, due to its limited rotational energy.

The reigning giant impact hypothesis for lunar formation (the canonical model) is one you’ve read in textbooks or heard about in the public sphere: early Earth is hit at a glancing angle by a Mars-sized body, “Theia”. The problem with this hypothesis is that it’s too singular; it makes the Moon’s creation a unique happenstance instead of an expected consequence of planet formation. A range of giant impacts should be able to form the Moon, not just one. There isn’t much variation in the canonical model’s giant impact because the giant impact’s angular momentum is limited to the present-day Earth-Moon angular momentum. According to conservation of angular momentum, we would expect this to be true. However, there are ways to transfer angular momentum out of the Earth-Moon system to another system via gravitational tidal interactions with the sun (Ćuk & Stewart, 2012).

There is much greater variation in the kinds of high-angular-momentum (about twice the angular momentum of today’s Earth-Moon system) giant impacts that can form a lunar mass, which would make this event less singular. The other benefit of having higher angular momentum in the Earth-Moon system to begin with is that the giant impact has more rotational energy to better mix the post-impact material.

High-angular-momentum Moon-forming giant impacts tend to produce synestias, which will form the Moon from within the interior of Earth while it is heavily vaporized, extended, and oblate. Not only do a wide range of giant impacts form Moon-forming synestias, but creating an isotopically Earth-like Moon is comparatively easy in synestias because the material is well-mixed and the Moon grows from moonlets that condense out of Earth’s vapor, which has the same composition as Earth.

Caption. A wide range of giant impact initial conditions (ratio of mass of impactor to target body, angle of impact, relative velocity of impactor) can produce a Moon-forming synestia. This figure demonstrates two extreme cases. Both cases are quick, near head-on collisions. The left shows an equal mass impactor and target, and the right a small impactor and large target colliding. Credit: G. O. Hollyday and S. J. Lock.

There are many different kinds of giant impacts that can create a Moon-forming synestia, anywhere from two equal size (half-Earth mass), off-center bodies impacting each other to a small body ramming near head-on into a large body (see image above). There are a great multitude of angles, relative velocities, and relative sizes the impactors may hit each other with and still form a Moon. This is what makes a synestia a robust hypothesis for forming the Moon; we do not need to appeal to an improbable impact scenario to explain the Moon’s mass.

How does the work done on the dynamics of moon formation in planet-disk systems differ from those within synestias?

In the first lunar formation computer simulations of planet-disk systems, gas was omitted from moon formation dynamics. It was thought that there was negligible gas within disks after a giant impact, so only solid post-giant-impact debris in disks were modeled. In disks ignoring gas, the Moon’s formation timescale was rapid, about 1 month (Kokubo et al., 2000).

After further research was completed on giant impacts and the thermodynamics within planet-disk systems, modelers realized that the debris disk was partially vaporized. Gas drag was integrated into simulations of canonical moon-forming giant impacts and the timescale on which the Moon accreted increased to 100’s of years (Salmon & Canup, 2012). However, it was assumed that gas was present only in certain locations within a planet-disk system, specifically, between the planet and the location of the growing moon. The material in the disk beyond the Roche limit (the radius beyond which moons are not broken apart by gravitational forces), the material that fed the growing moon, did not contain vapor.

In comparison, there is a tremendous vapor fraction within synestias and gas is present everywhere in the system. This is why gas dynamics are so important within synestias, and why the Moon’s formation timescale in synestias is so long, 10’s of years at the minimum (Lock et al., 2018).

What determines whether a planetary object is a synestia? Forces Acting Within a Synestia