Synestias are a new type of planetary structure (think planets, moons, and planetary disks) discovered by (Lock & Stewart, 2017). Lock and Stewart were searching for an alternative hypothesis that could account for some of the loose ends of the prevailing Moon-formation model. There is strong evidence that a giant impact formed the Moon (Canup, 2019; Stevenson & Halliday, 2014). However, the specifics of the Moon-forming giant impact have been hotly debated within the lunar science community.

Since the 1970’s, the main hypothesis for the formation of the Moon (now known as the canonical model) has been that a Mars-sized object slowly glanced a young Earth (Canup & Asphaug, 2001). The canonical model is the giant impact hypothesis (Hartmann & Davis, 1974; Hartmann & Davis, 1975; Cameron & Ward, 1976) that most people outside lunar research circles are most familiar with. However, perhaps unbeknownst to the public, the lunar community has extensively debated the validity of the canonical model. It is common for scientists to investigate all aspects of popular hypotheses. The great debate within the lunar community stems from the inadequacy of the canonical model to explain why the Moon and Earth have similar chemistry and isotopes. Predictions from numerical simulations of the Moon-forming giant impact based on the canonical model does not seem to agree with lunar geochemical data.

The giant impact simulations for the canonical model assume that the angular momentum of the Earth-Moon system has not changed throughout the life of our solar system. As a consequence,

It took a while for the science of giant impacts and orbital dynamics to catch up with the canonical model. Ćuk & Stewart, 2012 were able to provide a mechanism for decreasing the angular momentum of the Earth-Moon system over time, and (Ćuk & Stewart, 2012) and (Canup, 2012) simulated higher-energy, higher-angular-momentum giant impacts with a better understanding of the behavior of rocky materials under extreme pressure and temperature conditions.

As Lock and Stewart studied a range of initial conditions for their database of higher-energy, higher-angular-momentum Moon-forming giant impacts, they noticed that some of the impacts resulted in a structure that was not a typical moon-forming disk. They had a flared shape similar to that of traditional disks (see image below) but did not have the same dynamics.

These new structures were continuous bodies (as opposed to a distinct planet with a disk that separately orbits the planet). They had rapidly rotating centers, emplacing more mass in their moon-forming regions, attached to a gaseous disk-like (flared) structure, resulting in higher pressures (thus higher chemical equilibrium) in their moon-forming regions. Lock and Stewart called these structures synestias, after “syn-” meaning together and the goddess Hestia, who rules over architecture. 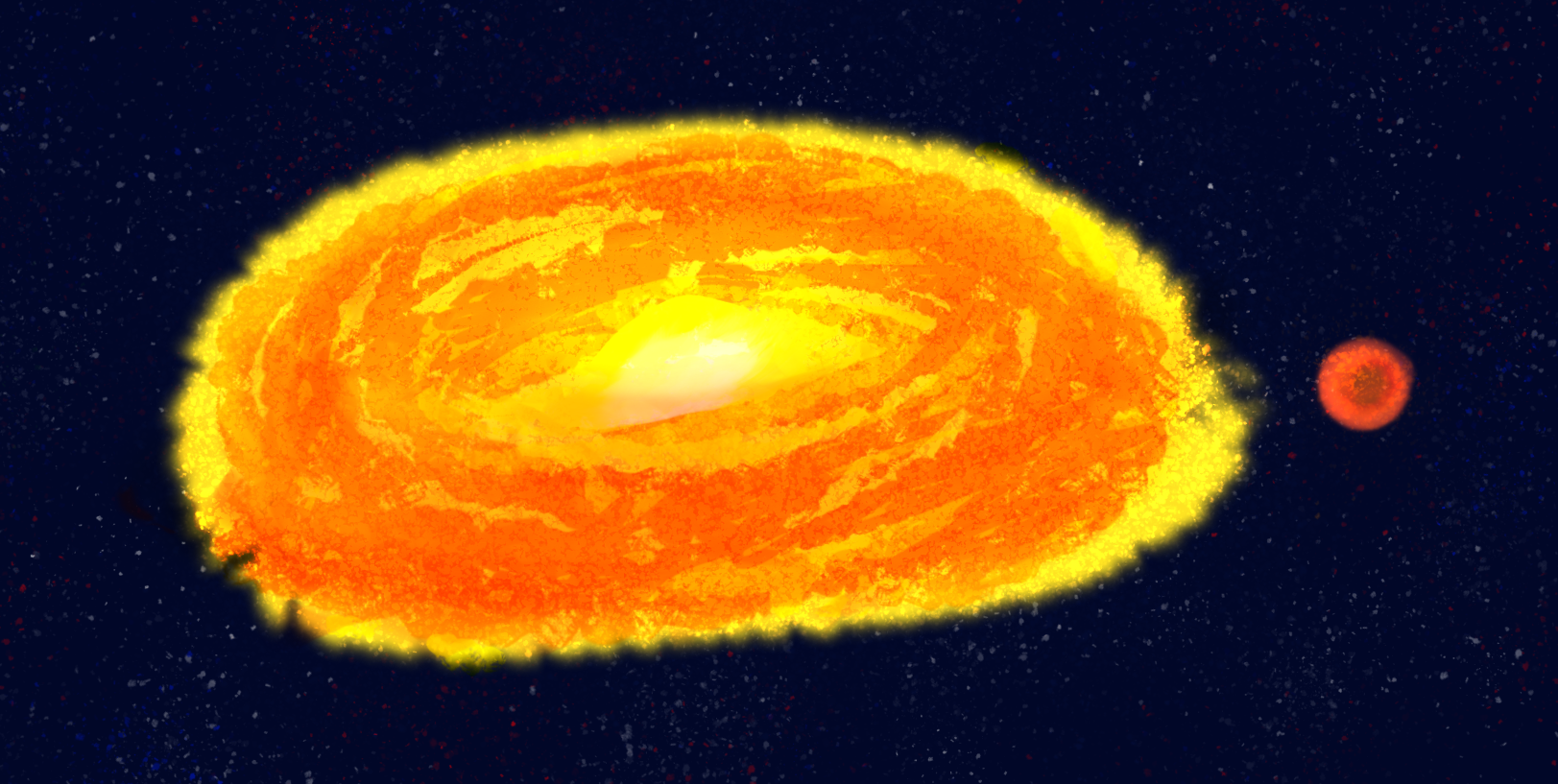 Synestias have a physical shape resembling that of a giant doughnut (about 8,000 times as wide as Earth is now) with no hole at the center. The image above is a conceptual rendering of a synestia. It is based on researchers’ best knowledge of what a synestia might look like based on fluid-particle simulations of giant impacts (a synestia has not been observed in space yet). The easiest way to form a synestia is through a giant impact: a collision between a planet-sized body with enough energy to liquefy and vaporize a sizeable proportion of the impacting body. The colliding bodies will quickly (on the order of an Earth day or two) form one continuous swirling mass of molten and vaporous rock - a synestia. Most of the interior of a synestia is made of turbulent rock vapor, which is opaque to visible light (e.g. we can’t see through a synestia) and gives a synestia its flared shape. The surface of a synestia is essentially a cloud cover; it’s comprised of many molten rock droplets that have condensed from gas after radiating their heat into space. These condensates are very hot (2300 K) so the surface of a synestia glows like magma does on Earth. The condensates fall towards the interior of the synestia and collect together into moonlets which ultimately combine into a moon. Thus, the wholly-grown moon forms within a synestia.

In the artistic rendering above, you’ll notice there is a moon (small glowing sphere to the right) orbiting the synestia. This moon forms within the synestia but the synestia has cooled and contracted to the point that it has retracted from the moon. The fully-formed moon is now physically separate from the synestia.

At the surface of a synestia, rock vapor is free to glow and radiate its heat away into cold space (in other words, the rock vapor cools) until it condenses into droplets. The surrounding gas cannot support the droplets, so they rain towards the midplane. Small moonlets coalesce from this rock rain over time, and eventually accrete into one large moon. Since the Moon is essentially a large, hot, liquid, spherical rock at this point, it too will glow (like lava) as heat radiates from its surface, cooling the interior. The Moon appears darker than the synestia in the image above because the Moon’s surface cools more quickly in the absence of gas.

How Does a Synestia Become the Earth We Know Today?¶

Caption. Time evolution: from giant impact to synestia. Video zooms out. A small body quickly initiates a giant impact with a rapidly rotating early Earth. This is one type of impact that forms an Earth-mass synestia. The impacting bodies continue to collide. High pressures and temperatures generated from shocks in the giant impact vaporize and melt material. The system settles and thermally equilibrates into a synestia. The dark orange flared shape represents the vapor-dominated disk-like region. The golden ellipsoid is the liquid-dominated planet-like region. Credit: Sarah T. Stewart, U. of California, Davis (Stewart et al., 2019). Visualization by Advanced Visualization Lab, National Center for Supercomputing Applications, U. of Illinois. Funded in part by the National Science Foundation as part of the CADENS project.

For comparison, the video below (with audio) shows the formation of a planet-disk system via a giant impact.

Caption. Time evolution: from canonical giant impact to planet-disk system. Video zooms out. A Mars-size body “Theia” quickly initiates a grazing giant impact with early Earth. This is the canonical model. The impacting bodies continue to collide. Thermal energy from the giant impact melts material, while rotational energy spins the system. The system settles into distinct planet and disk components. Liquid moonlets (orange clumps) and lack of vapor distinguish the disk from the liquid-dominated planet (golden sphere). A moon is visible at the top. Credit: Robin M. Canup, Southwest Research Institute (Canup et al., 2018). Visualization by Advanced Visualization Lab, National Center for Supercomputing Applications, U. of Illinois. Funded in part by the National Science Foundation as part of the CADENS project.

The conceptual art of a synestia in the section above (“What Does a Synestia Look Like?”) shows the final step of moon formation in a synestia not seen in the video above of the formation of a synestia titled “Making a Synestia”. The conceptual image reveals what a synestia looks like a couple of days after the giant impact that formed it. A synestia is not a static body. Unlike a planet, a synestia will drastically evolve with time. This transition is quick relative to geological timescales; it can be on the order of 10’s of years.

A synestia’s shape will remain flared for some time. The photosphere of a synestia, the optically thin layer enveloping a synestia, is in contact with the cold (200 K) vacuum of space. The photosphere is the surface where vapor saturates and is able to condense. Think of it as a synestia’s cloud layer. The photosphere will radiate away heat, causing the outer layers of vapor to condense into rock rain. As a synestia continues to shrink and condense, its outer edges recede with time. Eventually, a synestia will cool and shrink to a more spherical shape and transition into a rapidly rotating, molten planet. Since the planet is rapidly rotating, it will have a bulge around its equator, taking on an ellipsoidal shape that is described as oblate.